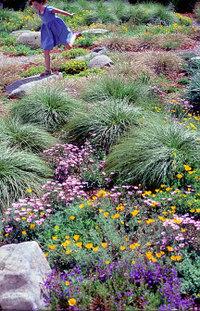 Throughout its twenty-five year development, the one-acre garden that surrounds my home has elicited the curiosity and participation of almost as many children as it has adult horticulturists.  At first a ruderal landscape, it has grown into a maze of natural sunlit rooms and meandering trails.  The land was once overgrazed in some portions, sprouting weeds in other parts and donning numerous tree stumps, remains of the mature live oaks that once dominated this gentle slope. The previous owner planted five Monterey pines in front of the house for shade, and an aleppo on the east side.  A row of lofty Eucalyptus trees along the road, remains from wood lot speculation on the Nipomo mesa in the early nineteen hundreds, still serves as a windbreak.

Many enthusiastic children have explored the garden, all of them promptly adopting the aleppo pine as a favorite climbing tree and the Eucalyptus grove as their swamp.  The first two were brothers who lived on a horse ranch up the road.  They ventured into my early gardening efforts in the late nineteen seventies.  When not at play, they were helping me plant trees, spread mulch and create paths.  I looked forward to seeing their inquisitive faces, and I learned to recognize that each held a different perspective of landscape.  One perceived the pine needles, beneath the trees, as "littering" my front yard, and wanted to dispose of them, while the other just wanted to put torrey pines and ironwoods in the ground as fast as his able body would permit.  I assured the older boy that I found the thick bed of needles appealing, and put him to work helping his brother plant trees.

Through the years there have been those young people who asked for work to earn a bit of spending money.  My son and his friend were two such boys.  Both tall lean adolescents at that time, with a surplus of energy and the strength of a football team, they worked in the greenhouse with my husband as well as in the garden.  Together they watered plants, mixed soil, stacked bales of peat and potted seedlings, the labor of which seemed to quiet their minds.  The friend’s younger sister worked alongside them sowing seed in the greenhouse flats.  At that time there was a large field of lupine across from my garden, where even the tallest boy could crouch low to the ground, and be covered entirely by flowers, becoming invisible, and one with the landscape.  After they had worked together for a couple of hours, all three children could be found in this fragrant field of blooming Lupinus, playing a game of hide and seek.

By the time my daughter was born in the early nineteen-eighties, a portion of the oaks had begun to re-establish themselves, the once juvenile ironwood trees had matured into a thicket, and a coppice of young pines replaced three mature Montereys that had fallen during a violent winter storm.  One side of the garden had grown to meet remnants of the neighbor's Christmas tree farm, while on the west side my husband and I began an Australian section, planting Grevillea under the Eucalyptus.  I carried my infant daughter first in a front carrier and later in a backpack.  Early in life she was exposed to the textures and scents in my garden.  While I stooped on the trails to prune the edges of wandering shrubs, she would reach out to stroke branches of rosemary and stems of sage, then leaning over my shoulder, she watched as I weeded and replanted containers.  Once mobile she quickly discovered the garden hose and wanted to be the first to water newly planted trees, taking an occasional mud bath in the process.

The few hot days, on the Central Coast usually occurred in September. On such days in the late nineteen eighties the youngsters outside my house could be found in one of three places.  With the ease of squirrels they might climb the closely set branches of the aleppo, seeking the upper boughs where the air moved freely and they could hear cones, from the neighboring Monterey pine, crackling in the heat as they opened, dispersing seeds in the wind.  If not in the tree they might be at its base burrowed in the yielding dusty-white centers of Calocephalus brownii, commonly called cushion bush.  Comforted by the cool wiry stems of these rounded forms, they would peer out from the centers, looking like lunar tumbleweeds. Lastly, they might be sitting on a large moss covered boulder in the shade, licking popsicles.

Children’s play has been a large part of my developing garden. The tire swing that hung from a grand old oak was retired in favor of a redwood climbing structure with two swings, a rope ladder and a wooden glider.  I planted native sedge under the swings convinced that it would endure the children’s activity.   Nearby a meadow grew out of an entirely native concept and the grasses became the western landscape through which my daughter and her friends rode their stick horses.  Lichen-covered boulders sparked the idea for a game they called “hot lava” in which the children leaped from one boulder to another attempting to avoid touching the grass or flowers beneath, and being consumed by what they pretended to be volcanic ash.  Playing within this setting came naturally to them.  Grass culms became magic wands and birch catkins fairy dust. As years passed the trees they planted grew alongside them, some into towering columns and others into gnarled climbing structures. Secret footpaths were created inadvertently from their games of chase and flashlight tag.

Now young adults, my daughter and her friends no longer hide, or play imaginary games in the garden.  More likely they can be found sitting on a tree stump or bench engrossed in conversation.  Their lives have taken place against a living backdrop, literally a growing ground, where childhood experiences mark the garden with memories like family photos on a bedroom wall.

Recent years have brought a new generation of children to this setting.  Two brothers, who are often accompanied by several comrades, visit to catch tree frogs or play cowboys in the bed of purple fountain grass.  One morning the bushy and overgrown grass was pruned.  That evening I was confronted by two downcast faces that queried “what happened to our fort?”  No amount of explanation would console them- only time and re-growth.  In the days that followed, the boys were comforted by planting flowers and searching for acorns which they insisted were be buried in the deep oak mulch.  But just swinging to and fro, their toes brushing the tips of dune sedge, seemed most soothing to them.

In late October I caught a glimpse through my living room window of one brother chasing the other through the meadow.  Only the tops of their brown hats and a flash of white smock could be seen through the deer grass.  "Did I just see a pilgrim?" I asked my husband.  I was standing at the atrium door in my living room. He dashed to the window just in time for both of us to see the boys brandishing their Halloween costumes before running home. They were “Pilgrims" venturing through our garden.