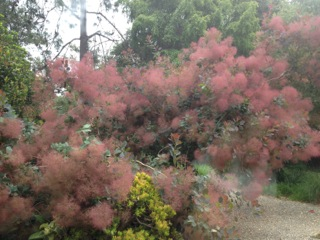 Although smoke tree is considered visually appealing for its plumose panicles in spring and summer, its lively display of autumn color is a dramatic encore.  From the family Anacardiacae, the genus Cotinus is typically multi-stemmed but can be pruned into a single main trunk. The appearance of “smoke” from which its common name is derived, results from silky filaments that develop on the inflorescence.  Naturally informal, the branches of some selections become whip-like extensions, making it an accommodating choice for the wild, unfettered garden.

Exploring available varieties can be as much a delight as discovering the numerous virtues of smoke bush.  Cotinus coggygria cultivars, ‘Purpureus’ and ‘Nordine Red’ produce leaves that are at first purple then  olive green.  ‘Velvet Cloak’ and ‘Royal Purple’ are thought to be the same plant, and hold their dark burgundy color throughout the summer months.  ‘Pink Champagne’ is a green-leaved variety with pinkish-beige plumes.  Cotinus obovatus, commonly called American smokewood or chattamwood, is sometimes grown for restoration purposes in wildlife habitats.  Its charcoal gray, scale-like bark becomes a pronounced feature in the winter landscape. ‘Grace’ is a hybrid between Cotinus coggygriaand Cotinus obovatus, and exhibits blue-green foliage and dark pink puffs of “smoke”. The most recently introduced cultivar ‘Golden Spirit’ offers bright golden and lime green foliage.  When bruised or cut the stems of ‘Golden Spirit’ exude a delightful fresh lemon-lime scent.  All Cotinus  produce a substance that when cut may cause dermatitis.

Smoke tree performs best in drier sites with rocky soil, and has a wide range of application.  It can be utilized at the edge of a lawn if given good drainage. Most varieties reach from ten to fifteen feet tall, but American smokewood can reach thirty feet in height. Cotinus coggygria  is   native to southern Europe, central China and the Himalayas whereas Cotinus obovatus occurs naturally from Tennessee to Alabama and west to the Edwards Plateau of Texas. American smokewood is pest and disease resistant and has potential for use in urban environments as a street tree. The patented variety ‘Golden Spirit’ was introduced from the Netherlands, as a seedling variant of Cotinus coggygria. Considered both large shrubs and small trees, all selections arerobust and sturdy.

Although the foliage on some cultivars emerges burgundy and turns olive green, all selections promise a brilliant array of hues as temperatures drop with approaching winter. Dark purple leaves of ‘Purpureus’ turn amber, apricot and wine-red before leaving a network of bare boughs.  Each specimen of American smokewood offers a unique palette of colors, but generally includes bright yellow, orange and purplish-red. The cultivar, ‘Golden Spirit’ lacks flowers, but its orbicular shaped, opaque leaves produce vibrant tints in fall making the shrub resemble a bowl of colorful candy. It is certain that whatever cultivar is preferred, smoke bush is deserving of a prominent site, and greater use as a garden subject.

My appreciation for smoke bush comes from observing the tree in my own garden.  The first one in my garden was ‘Purpureus’ transplanted from a five-gallon container to the side yard in the 1980’s.  My daughter was a young child at the time. It was my only experience with smoke bush, until a few years later when I saw other purple-leaved varieties while traveling in France. Visiting Beth Chatto’s garden, in England, I came across a Cotinus ‘Grace’ an elegant specimen donning soft pink plumes.  Returning home to California I was determined to add a few more purple-leaved varieties to my garden. And later still my husband lent contrast to the dark vivid purples by planting a ‘Golden Spirit’.

I am drawn to smoke tree not only by its beauty but its ease of care.  Performing best in full sun it dislikes wet conditions. When pruning, it is advisableto remove only dead wood and the occasional wandering stem.  An ideal choice for the sunny side of a building, the many spring flowers, autumn “smoke”, and winter dormant silhouette create dramatic patterns against any wall.  Since first planting the ‘Purpureus’ five other specimens of smoke bush have been added in my garden, all of which require minimal care.

In two decades the ‘Purpureus’ grew to eighteen feet in height and spread twenty-five feet.  Spring flowers would fade in summer and appear as mauve clouds encircling the dark claret leaved tree.  In an impulsive moment my husband drastically pruned the ‘Purpureus’.  When it did not leaf out the next spring I became fretful.  It was apparent in the following weeks that the tree had died.  Soon afterwards the ten foot high ‘Golden Spirit’ was lost as well, its trunk completely severed at the roots by gophers.  Attempting to take charge of this disappointing turn of events we planted two young ‘Golden Spirit’ in a large clay pot near the side door.  And after removing the ‘Purpureus’, we found two seedlings, from the mother tree, growing near the original trunk.  They are now five feet tall and flourishing, not a surprise to the seasoned gardener who knows trial and error is part of gardening, with successes often following at the heel of loss, and so it is with smoke tree.

The year now is 2014 and I just returned home from visiting my grown daughter who now lives in Boston.  She asked if we could plant a smoke tree together before I returned home to California.   I located a three gallon container plant at a local nursery.   Our visit to the nursery was joyous as dark clouds, portending inclement weather all morning, finally yielded a steady downpour of precious rain.  Living in the semi-arid climate I was thirsty for rain.  We planted the tree in the corner of her front yard so that it will grow to shade three living room windows.  A circle of small rocks line the trough surrounding its trunk.  I am looking forward to returning to Boston for another visit and to see how much the tree has grown. 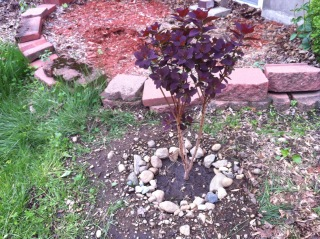