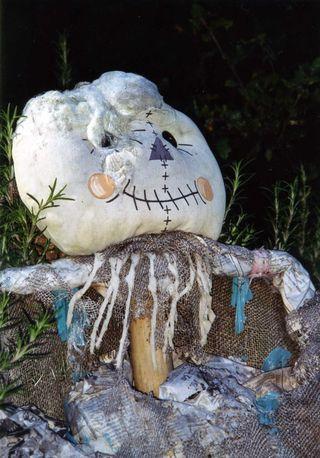 While perusing the pages of several fall nursery catalogues, I saw pictured whimsical scarecrows, equipped with names, costumes, and patchwork faces that brighten the already lively displays of flowers.  They are fashioned after farmers, rag dolls and the straw man in The Wizard of Oz.  Seeing them reminds me of the stick figures that have watched over my own vegetable garden in years past.

The addition of a scarecrow brings a mischievous touch to any garden.  They come in all shapes, sizes and styles, from homemade to store bought, with smiles that bring to one’s mind railroad tracks, needlepoint stitches, orthodontic braces, and tic-tac-toe.  Those watching over my vegetables have had noses made of buttons, and black triangle eyes inked on burlap.  The hair has been fashioned from an assortment of yarn and wool, and the bodies stuffed with paper, old rags, or hay.  Sometimes their construction was a collaborative effort between family members and neighbors.

My daughter and her friends next door made our first scarecrow.   They had planted rows of vegetables in an area of the pasture.  One child brought her father’s shirt, another her father’s trousers.  A younger sister contributed hay from the horse shed and a gunny bag emptied of molasses and oats.  I donated broom handle, hat, and marker, as we made a day of planting and creating the figure that was to stand guard over our vegetable starts.

Weathering the seasons, it stood with one arm pointed west, while the other dangled indiscriminately to one side. The torso was stuffed with newspaper, the arms and legs with alfalfa, and the head with cotton. As time passed the scarecrow leaned farther and farther to the right.  Eight months later it had fallen to ruin, cotton brains picked by the birds and stuffing melted like sugar in the rain.

I purchased the second scarecrow in the drugstore.  Taken, by the lively checkered pants and bright purple shirt, I whisked the fanciful figure into my shopping cart, to replace the worn and dilapidated one.  Taking it  home I planted the solid stick of a spine into the soil, straightened its beige tam, stood back to look, and found myself pleased with the result.  Prickly arms pointed resolutely toward the ground as if to say “I protect this plot of land!” Equipped with this colorful caricature, the garden seemed again complete.

By August the shirt had grown dull, the trousers drab, and the chest had begun to sag.  Our scarecrows effectiveness faded with the colors of its attire, needing the help of a few flashing strips of foil on a string.  Still, the slumping gray figure did elicit frightful shrieks from the neighborhood children, when they ran across the pasture at dusk.  Following their lead I took the tattered frame from the garden the following October, draped a black cape over its shoulders, and placed it near the front entrance to my house as a Halloween prop.

In late autumn the scarecrow was retired, leant against the fence near the garden gate.  My daughter suggested a facelift, new wardrobe and fresh chaff for padding around the crossed sticks that still held tufts of fabric.  Instead it stayed there unattended with half a smile pointing heavenward and one eye watching the land with an averted gaze. [Scarecrow02]

Since then many years have gone by, and two of the children are in college while another is in high school. What was once the vegetable garden has been transformed into something quite different. Roses were planted and a second gate added. During the construction of a new fence I discovered the scarecrows remains buried beneath an overgrown hedge.

The discovery gave way to nostalgia and led to an afternoon spent constructing a new scarecrow.  Snatching a burlap sack from the pantry, I created a face by attaching large buttons for the nose and eyes, and stitching a mouth below.  Finding unused quilt squares I added patches to a worn corduroy shirt.  Lastly, a wrinkled hat retrieved from my trunk, and the doweling from a weathered stick horse under the children’s fort.  A new scarecrow was born, stuffed with straw and sitting on a bale of hay guarding the entrance to the private rose garden. With an air of satisfaction I stepped back to view the finished product.  A new steward stood protectively watching over the land with all the beguiling dignity of its predecessors.
Essay