My affection for lawn stems from childhood, a time when I spent hours playing outdoors with the other neighborhood children.  We made tiaras, crowns, and bracelets from the clover and dandelions that grew randomly in the lawn my father tended.  Sitting on the grass tying stems into loose knots, linking them one into the other, we were occupied, peaceful, and engaged with our environment.  On sultry summer mid-western evenings, we took turns rolling down the long green hillside in front of my house, gaining speed until each of us barreled into the hedge below, laughing uproariously.  On those hot humid nights, the cool grass was a comfort to our bare arms and legs.

My yearning for “lawn” sparks a variety of seasonal memories.  In early childhood I played “Ring around the Rosie”, and during my teenage years there was lawn bowling at my grandmother’s house.  The scent of newly mown grass is an olfactory memory I imagine many children carry into adulthood.  In summer, from the stone pillar that stood catty-cornered to my home, I could smell the sweet fragrance filling the air as my father pushed the lawn mower.  In autumn from the same observation point I watched catalpa leaves fall, like pieces of dried parchment, creating a mosaic across the green carpet of grass.  Although my father left the leaves in our front yard, the sound of neighbors raking them into piles, is clear as rain in my mind.  Winter brought an unbroken field of white on which we rode our sleds from the top of my hill down to the level snow bank four houses below.  My longing becomes understandable when I realize that during my thirty-year marriage in California, not one of my homes could boast a lawn, until I discovered slender field sedge.

I moved west in the midst of a seven-year drought.  My husband promised me an emerald green landscape in winter, yet year after year I saw only brown hills.  Our first home was an apartment with a deck covered in green Astroturf.  The front and back yard of our next home was entirely ice plant, and two years after that we lived in a house surrounded by gravel and rock.  My present residence began as rural acreage of oak stumps and exotics.  For me a lawn seemed to have become a thing of the past.  At the time xeriscape was becoming a trend in landscaping. Inquiring at a local nursery, I learned that I could plant a drought tolerant native grass called Carex praegracilis. 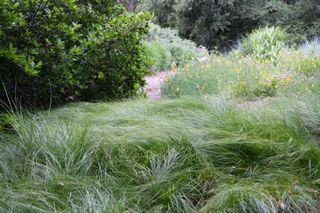 When I found it would withstand some foot traffic I wanted to experiment beneath my daughter’s play structure, to see the plant’s response to the activity of children.  Early one fall morning I enlisted the help of two boys who lived next door.  We planted numerous liners of the Carex beneath the swing set in my backyard.  The plants received full morning sunlight and late afternoon sun, with filtered light during the interim through the wide spreading branches of a 200-year old oak tree.  I hand watered the young plants through the first summer as they established their roots.  Then the green carpet spread and flourished without irrigation, but with four reasonably wet winters.

Since that time I have planted slender field sedge on my side yard in a shaded area, and massed it on a berm beside the road.  Whether neatly trimmed, or left long and wispy, slender field sedge easily serves as a lawn substitute.  From my kitchen window I have watched children playing games of chase across this green patch, making nests in the sedge, playing pretend games, and stroking the tufts of foliage with their bare toes as they swing back and forth.

Although it looks like grass, Carex praegracilis is technically sedge, and if I remember correctly the verse from my youth, the difference is “sedges have edges, rushes are round, and grasses have joints”.  However, a plant taxonomist certainly might offer a different opinion. Apparently slender field sedge has received attention in horticultural circles in recent years, but what I have learned has been through observation in my garden.  The sedge thrives in sandy loam, making it suitable for my home, which sits on a stabilized sand dune.  Living in a semi-arid climate, in a state with growing water issues, slender field sedge becomes the perfect choice for my garden.  Yes, it will turn brown in summer without water, but I have easily kept it green with modest supplemental irrigation.

I once overheard a landscape designer speaking to my husband. “I came to your Woodland Garden presentation, and at the time you recommended Carex praegracilis.  You seemed to feel so strongly about it that I took a risk.  At the time I had a client who was six months pregnant.  She had a few plum trees in her back yard, and she did not want a lawn but she did want a surface that her child could play on, so I suggested slender field sedge.  That child is now a toddler playing on a soft rich green surface.  I want to thank you.”  Hearing this story was validating, but it was not the first time I was to hear positive remarks about this lawn substitute, and it would not be the last.

Two other episodes captured the essence of what I miss from childhood, but managed to recapture in my present landscape.  Returning to work after lunch one day, I passed the now six-foot area in the side yard that is covered with slender field sedge.  The long threads were pressed to the ground in the perfect imprint of someone napping.  In the office I learned that an office colleague had fallen asleep there, during her lunch break.  In the evening of that same day I saw my neighbor, a teenage boy, sitting on a swing in the backyard, dragging his feet across the sedge, and singing.  He was one of the boys who helped me plant the Carex liners years earlier.  He was still singing, as I stood at the kitchen window washing dishes after dinner.  As the sky darkened and the hour grew late the singing stopped.  It was then that I found the young man’s note, wedged between my backdoor and the doorframe.  It read “thank you for giving me such a beautiful place to think.  Your garden is soft.  It inspires me to sing.  It creates a mellow side of me.”  At the bottom of the paper was a rough sketch of the grass, tree, and a heart on a swing.